The municipality of Oak Bay sits on the southeast edge of Victoria. It takes its name from the picturesque Garry Oak which are found throughout the area. This historic upscale municipality is widely considered one of the most desirable places to live in the country.

Originally home to the Coast Salish people of the Songhees Nation, who were living in Victoria near what is now Willows Beach, the area was first settled in the mid 1800’s after the establishment of Fort Victoria. For a while, Oak Bay served as a holiday destination for upper class Victorian families as well as people from elsewhere, they built summer cottages near local beaches. 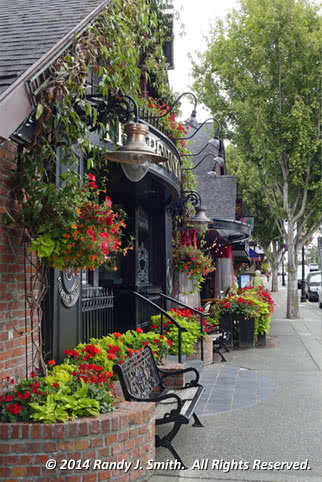 Oak Bay was incorporated in 1906 and development accelerated with the laying of water lines and sewer pipes. Oak Bay Village was established around this time as the business centre of the community. John Charles Olmstead, a famous American landscape architect was hired to design the Uplands neighborhood in 1907, and his design was radical for the time. Large properties and gracefully curving streets rather than the traditional gridiron streetscape created a new type of residential suburban design that had not been seen before in Canada. This lovely area helped set the tone for future development in Oak Bay.

During the 1950’s and early 1960’s construction boomed and Oak Bay was “built out” and the middle to upper class character of the municipality was supported by the quality of construction, larger lot sizes and attention to detail. These days Oak Bay claims more millionaires per square kilometre than anywhere else in Canada, and its sterling reputation has led to solid and increasing property values. Housing is is comprised mainly of single family residences, there are many estate properties, and even the more modestly sized homes are quite luxurious. Due to its popularity as a destination for retirees, there are also a number of retirement homes.

Oak Bay supports its own police force and fire department, and is fully serviced with water and sewer, garbage and recyclable collection. There is also a Canadian Coast Guard Auxiliary unit – the Oak Bay Sea Rescue Society. Spanning the borders of Oak Bay and Saanich is the University of Victoria.

There is no shortage of recreational opportunities in Oak Bay, with three rec centres offering various programs and activities, three golf courses within municipal boundaries, and several parks and beaches including Willows Beach, Gonzales Beach and Cattle Point. Beware of the Golf Course Ghost if you hit the links at the Victoria Golf Course, she likes to hang out at the seventh fairway, or frighten motorists driving through the course by appearing in the middle of the road!

The big event here is the annual Oak Bay Tea Party, held since 1963 at Willows Park on the first weekend in June. It features a parade, air show, bathtub race and other silly competitions, and is a fundraiser for several local charities.

“More English than England” they say of Oak Bay – of course that really only refers to the atmosphere and architecture of this lovely place nowadays. If you are looking for a quiet, beautiful seaside community in which to live, venture “beyond the tweed curtain”, I’m sure you’ll love Oak Bay.